The Know AML website uses a third-party service provided by Google that dynamically translates web content. Translations are machine generated, so may not be an exact or complete translation, and Know AML cannot guarantee the accuracy of translated content. Know AML and its employees will not be liable for any direct, indirect, or consequential damages (even if foreseeable) resulting from use of the Google Translate feature. For further support with Google Translate, visit Google Translate Help. 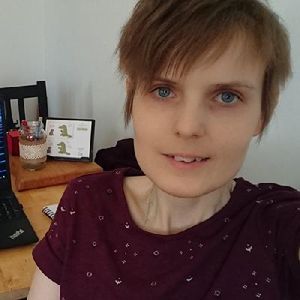 I was diagnosed in August 2014; I had been on holiday during July and had noticed a lot of bruises, but I brushed it off—maybe I just bruise easily, I’m sure they’ll go away soon—I didn’t ever imagine that they could be connected to anything serious.

After I got home, the bruises were followed up by what I now know to be other signs and symptoms of blood cancer. First was infection, in the form of tonsillitis. I was prescribed antibiotics and the tonsillitis cleared up, but other symptoms persisted: anemia, fatigue, elevated heart rate, shortness of breath, lack of appetite. Looking back, it’s pretty disquieting how many of the symptoms of leukemia are incredibly similar to cough, cold, and flu symptoms, or, in my case, it just seemed like I was taking a while to bounce back from tonsillitis and possibly having a reaction to the antibiotics I was given for it.

After a few GP visits where my symptoms were explained away in this manner, I was told to come back if things hadn’t improved by the end of the week. Things got worse, but I couldn’t get an appointment, so I called the NHS non-urgent helpline and was directed to go straight to A+E because of my elevated heart rate. By this time, walking from the car to the waiting room was a huge effort, and when I stood up to go through to triage, I passed out.

A few days after being moved from A+E to a positive pressure room on the hematology ward, my lungs stopped working properly. On admission, my white cell count had been extremely high due to the aggressive nature of acute myeloid leukemia—it progresses very quickly. This meant that my blood was very short of red blood cells that carry oxygen around the body, and it was also ‘stickier’ than normal. I woke up in the middle of the night unable to breathe properly and was quickly sent down to the critical care unit where I was hooked up to a machine to help my lungs inflate every time I took a breath.

I spent about a week in intensive care where my chemo continued as I was slowly eased off the breathing machine and then taken back to my isolation room on the ward. I then spent around 5 months going back and forward to the hospital for each treatment cycle, having daily chemotherapy and blood transfusions as an inpatient and with frequent trips to A+E in between if I spiked a temperature, or to the day unit if I needed more blood products. This part of my treatment has become kind of a blur in my memory as it has all merged together and a lot has happened since, but I had multiple issues along the way due to side effects of the chemotherapy as it wiped out my immune system. After my treatment regime was finished, I was declared to be in full remission and released from hospital the day before Christmas. I took another month to recover some strength and then started back at work, trying to get my life back to normal.

Fast-forward to summer 2015, when my regular monthly blood counts came back low. A bone marrow biopsy confirmed a relapse—the same acute myeloid leukemia had returned—and it was determined that I would need to have a bone marrow transplant. At this point, my chances of survival dropped from around 80% to 50%.

In order to have my transplant, I needed to be in remission and so I was put on a course of ‘salvage chemotherapy’. This was followed by a week of total body irradiation (TBI) sessions and then a last bit of chemo to make sure all the cancerous cells were killed (along with all the healthy ones…), and to make space for the new bone marrow.

I had my transplant in December 2015. I thought chemotherapy had been grueling, but this was a whole new level of horribleness. I spent the worst days lying flat on my face because I didn’t have the energy to sit up or rollover the next time I needed to be sick. I craved sleep, but with the effects of radiotherapy on the digestive system, it felt like my insides were dissolving and the pain from that was constant. I was allowed to leave the hospital (this time 2 days before Christmas) after a bone marrow biopsy revealed that my new bone marrow was functioning and producing new blood cells. This was the start of a long recovery process, waiting for my blood counts to go up and managing the short-term side effects, including graft-versus-host disease (GvHD) whereby the donated marrow (and the new immune system that came with it) viewed my own body’s cells as foreign and attacked them.

100 days after the transplant is considered a milestone and the results of a bone marrow biopsy show whether it has been a success. Mine showed no residual disease and complete chimerism—this meant I was leukemia free and all my new blood cells were being created by the donor’s (healthy) bone marrow.

So, I thought I was finally done with hospitals and doctors, but just as I was starting to get back to normal, I noticed that I had blurry vision in my left eye. The optician sent me straight to eye casualty as she had found that there was pressure on the back on my eye. After a long wait for an MRI scan, a mass was discovered behind my eye. It was first misdiagnosed as a brain tumor (a terrifying moment), but later determined to be a collection of leukemic cells that had built up and formed a solid mass (not really any less scary). As it had grown, it had slowly crushed my optic nerve until the sight was completely gone. Apparently, this is very rare—leukemia is not supposed to cross the blood-brain barrier, but I had blast cells in my cerebral spinal fluid.

This led to my second relapse, first in the central nervous system and then in the bone marrow. I needed radiotherapy targeted at my head to get rid of the leukemic mass and by the time this treatment course was finished, my blast percentage had reached 8%—over the 5% threshold for me to be able to have a donor lymphocyte infusion (DLI, sometimes called a top-up transplant), which would involve receiving more cells from my original donor.

This meant that I had run out of treatment options. My doctor told me they could keep me comfortable with blood products, but I wasn’t expected to live longer than 2 months. Up until then, I had gotten through by staying as positive as I could and putting my faith in the wonderful doctors and nurses looking after me, but this was a low point—It felt like the world had given up on me and all the effort to stay alive had been for nothing. I felt empty and hopeless.

Luckily for me, there was a place available on a clinical trial that I was eligible for. This was a phase I trial, with the purpose of finding the best dosage, and it was made clear to me that it would not be curative, but aim to extend life. Treatment on the trial was a combination of chemotherapy and immunotherapy and involved daily injections for a week every 6 weeks. Alongside the trial, I also received intrathecal chemotherapy, which is injected into the spine during a lumbar puncture.

I had an unexpectedly good response to the trial treatment—after three cycles I had achieved remission, and after six, I was now able to have a DLI. Because the trial treatment was a new combination, it was unknown if it would be effective long term. Following my DLI, I was allowed to stay on the trial longer than the six planned cycles as it was working for me, keeping the leukemia away, and I ended up with 18 cycles in total over 2 years.

I am now in the long recovery process and keeping my fingers crossed, dealing with a few long-term effects while trying to get back to my life. My thoughts have turned to those currently going through acute myeloid leukemia and those who will be affected by it in the future. I hope in the future that no one has to go through the same as me, and the only way I know how to help is by sharing my experiences, helping to raise awareness, and advocating for future patients.